As the official sponsor of the 2015 S&S Limousine Country Megaticket, we're thrilled to provide this updated information page for important dates, venue changes and other concert updates.

If you're a regular to the Country Megaticket, feel free to scroll down and check out the official 2015 line-up or order your tickets. For those of you who are thinking of attending this year's series for the first time, read on to learn why this is hands-down the most fun and affordable way to enjoy live country music all summer long. We look forward to seeing you all at Darien Lake this year!

What is the S&S Limousines Country Megaticket Package?

Country Megaticket is a special admission pass that grants you entry to nine of the hottest country music concerts in Western NY during the summer of 2015. Tickets are offered in a variety of packages and price ranges, based on how close to the stage you'd like to be. Here's a breakdown of the ticket prices for this year's Megaticket in Darien NY:

Ready to Buy Your Country Megaticket?

Tickets to the 2015 S & S Limousine Country Megaticket can be purchased securely online here. There, you'll also be able to read more about the venue, acts and other information not listed on this page.

July 11: Toby Keith (with Guests to be announced)

Feel like starting the party early? For just $72 you can get early entrance to all nine shows at Darien Lake this year. Or take advantage of Preferred Lawn Seating area for just $99 more, to ensure the best view of the shows in addition to early entry. Available in limited quantities!

Into more than just country? Save up to 50% off the cost of add-on park admissions when you buy a Darien Lake season pass at the same time as your Country Megaticket. This will also grant you access to the many perks of being a season ticket holder! 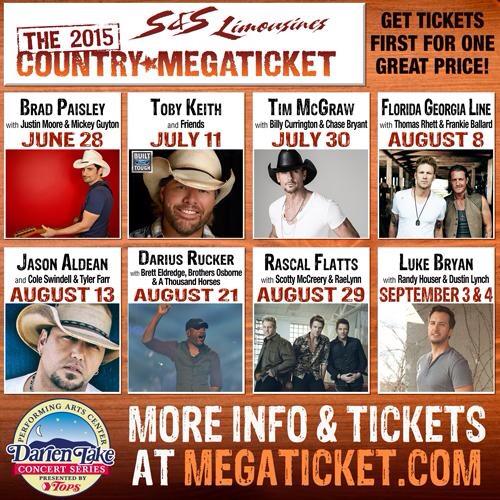 When you need NY limo service that's unmatched in every way, call S&S at 585-444-6666 and see why we were voted the Democrat & Chronicle Rochester's Choice Award for limousines service 10 years in a row.